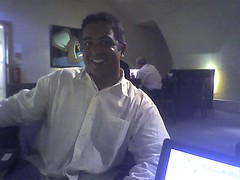 Jaman, California-based company that offers full length movies for either downloads or rental via a P2P client is planning to launch a European arm. The move is prior to an expansion of its programme of buying up rights to “mid-tail” independent and niche films.

Unlike Joost, which is really aimed at TV viewers, Jaman is going for audiences who want successful independent film (the kind of thing “Trainspotting” was once before it hit the big time) which they can’t get in their local cinema. (You might think that would mean that there would be a lot of Bollywood movies and Asian or Latin American cinema on it as a result. There is indeed much of this content, but so far 60% of Jaman’s content is actually English language based).

Babelgum is closest to Jaman’s model, with it’s emphasis on independent professionally produced video content, but unlike both of the aforementioned, Jaman is about downloading high quality HD film to rent or keep, rather than P2P streaming.

Jaman’s player works on Windows XP, Vista and Mac. Jaman has also developed an unofficial plug-in for the AppleTV device which syncs content downloaded via the Jaman player (they have their own proprietary DRM player which, like Apple’s Fairplay DRM, allows the sharing of the content across 5 devices) to Apples box. They’re lead engineer on the project actually came from Apple, in fact.

Founder and CEO Gaurav Dhillon previously co-founded Informatica in 1992, which IPO’d in 1999. Jaman is not short of friends in high places. Backers include Hearst Corporation.

Although Jaman’s video downloads to a PC, evidently they expect people to hook up the PC to a proper HD-capable TV and watch it in all its glory there. Any user creating an account – the sites is on an open Beta right now – will get three free film downloads before they have to shell out any money.

So far Jaman has aggregated over 1,500 international movies, and plans to acquire more content after its series A funding round, which should be completed this Autumn.

I met with British-born Faisal Galaria, recently appointed General manager EMEA, who was at one point a European director of Skype…